A hybrid tutorial and general documentation for the AutoSpill algorithm in OMIQ.

This is a hybrid tutorial and general documentation for the AutoSpill algorithm in OMIQ. It includes example data which correspond to the examples shown in each step and allow for you to follow along using your own OMIQ account.

AutoSpill is a method for calculating and optimizing the spillover matrix necessary for compensation of fluorescence measurements from flow cytometry data.

The fundamental inputs and results of the method are the same as the standard procedure communicated by Bagwell and Adams (1993). I.e., a set of singly-stained control files (one for each fluorescent dye) is used to calculate the fluorescence spillover for each dye into off-target detector channels on the cytometer. This calculation yields a spillover matrix used for compensation.

The key innovation that AutoSpill makes over the traditional approach of Bagwell and Adams is that it does not rely on distinctly gated positive and negative populations for each singly-stained control file. It instead uses robust linear regression between channels (followed by an iterative refinement routine) in the control file to derive the spillover matrix.

AutoSpill offers some other functionalities that may improve the traditional spillover calculation process:

This section discusses how to configure and run AutoSpill in OMIQ. If you will follow along, download the example data package. The steps below can be followed in order.

AutoSpill requires the same inputs that are required for traditional calculation of a spillover matrix. Namely, a set of singly-stained control files, one for each dye in the matrix.

The FCS files included in the example data package include 6 singly-stained controls and 1 PBMC sample. You can upload these 7 FCS files to OMIQ.

The name of the metadata column must be “dye”. The contents of the column must be the exact primary feature name (aka parameter name, channel name) that is used to detect a positive signal for the given dye in the given control file. E.g., “Ax488-A”, “PacBlu-A”.

Note: in traditional spillover calculation, a different file may be used for the negative control compared to the positive control. This is not possible with AutoSpill. Each control file must encompass the negative and positive data for the given dye.

If you’re doing this process for a new dataset and find the step of inputting channel names to metadata tedious, there are some tricks you can use to help. Both of these tricks are noted in the video above.

Note: AutoSpill also allows an optional additional metadata column named “wavelength” for annotating peak emission wavelength. This has no impact on the AutoSpill algorithm. It is only used to label diagnostic plots. This column may also be incomplete, with wavelength values for some dyes but not others.

Add an AutoSpill task to the Workflow. It should be directly off the Workflow Root or after gating and subsampling in order to manually select a gate on which to run the calculation. Make sure not to apply compensation or scaling ahead of AutoSpill, because that will prevent the correct calculation of the results.

In the file selector, choose the singly-stained control files. A trick for finding these files is to search using this term: dye::!NA, which uses a negated metadata search to find only control files in the dye column.

In the feature selector, choose the features that correspond to the selected files. You can do this manually, but there is also a trick where you can copy the features from other locations in OMIQ, such as preexisting tasks or compensation matrices. One example is demonstrated in the video above.

If you want AutoSpill to automatically pregate your scatter channels to exclude debris etc., then enable this option. Using clean input data is recommended, so if this option is not enabled, then you should run AutoSpill using gating and subsampling instead.

If the pregating option is selected, a forward and side scatter channel must be selected in the list of features. Note that AutoSpill diagnostic output will include visualizations of the autogating. OMIQ also allows the usage of the autogating results in downstream analysis using categorical gates.

AutoSpill can produce many plots and statistics that describe its performance. To produce these outputs, choose a level of Full. A potential consideration here is that full diagnostic output consumes a bit more storage space. However, it can be enriching to evaluate algorithm performance.

If the AutoSpill run should include autofluorescence (AF) subtraction, then select the appropriate channel here. You must select the channel in the feature list to the left in order for it to be selectable in this selector. You must also have the control file (an unstained file) selected in the list of files, and it must be appropriately annotated in the metadata. Put another way, this empty channel used for AF subtraction requires configuration just like any other normal fluorescent channel, with the one nuance being that you specifically identify it in this AF selector.

Note: AF subtraction mode does not change the fundamental AutoSpill algorithm. You can think of it as just including an additional endogenous dye as opposed to an exogenous dye provided by artificial staining. Selecting the AF channel here just helps AutoSpill provide adjusted diagnostic outputs. The resulting spillover matrix will be the same regardless of if this selector is filled or not.

Note that the AF unstained control file should be of the same base tissue/cell type as the singly-stained controls so that it exhibits the same AF profile. Additionally, the selected channel should ideally be the one where the AF signal is the strongest.

Click the run button to run AutoSpill. If you have any configuration errors, OMIQ will report them so they can be fixed.

This section describes what to do after AutoSpill is done running.

The primary output of AutoSpill is the optimized spillover matrix. To use it:

Visualize and/or Adjust the Compensation Matrix

Visualizing the effect of the compensation and adjusting individual spillover values is the same process as it is normally. It is covered briefly in the video above. You may also review the section on compensation in the general OMIQ tutorial.

If you choose to pregate your data, there are diagnostic plots that show what the gating looks like (see the section below). You can also use the gates in OMIQ. Doing so is an identical process to capturing clustering results as categorical filters (see that section in the general tutorial). We took this approach because it was significantly simpler to accomplish, given how the AutoSpill algorithm is implemented.

This is also briefly explained in the video above. 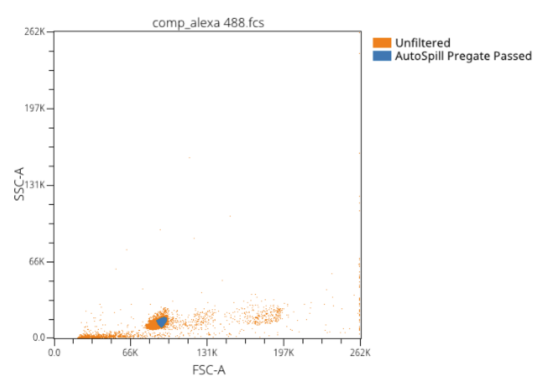 Pregating results viewed as a scatterplot overlay in an OMIQ Figure after converting the results to a categorical filter.

An optional first stage of AutoSpill replaces the manual process of gating out contaminating events and debris. OMIQ determines the forward and side scatter measurement channels automatically and with some flexibility, with standard targets of “FSC-A” and “SSC-A”. After trimming extreme events at the margins, density estimation is used to determine peaks and perform Voronoi tessellation using the peak locations. The data contained in this tile is then used to obtain a rectangular subregion to repeat the process with a finer density estimation bandwidth. From the resultant tile, estimated density points exceeding a threshold value are determined and the convex hull of these points determines the polygon that is used as the final gate. 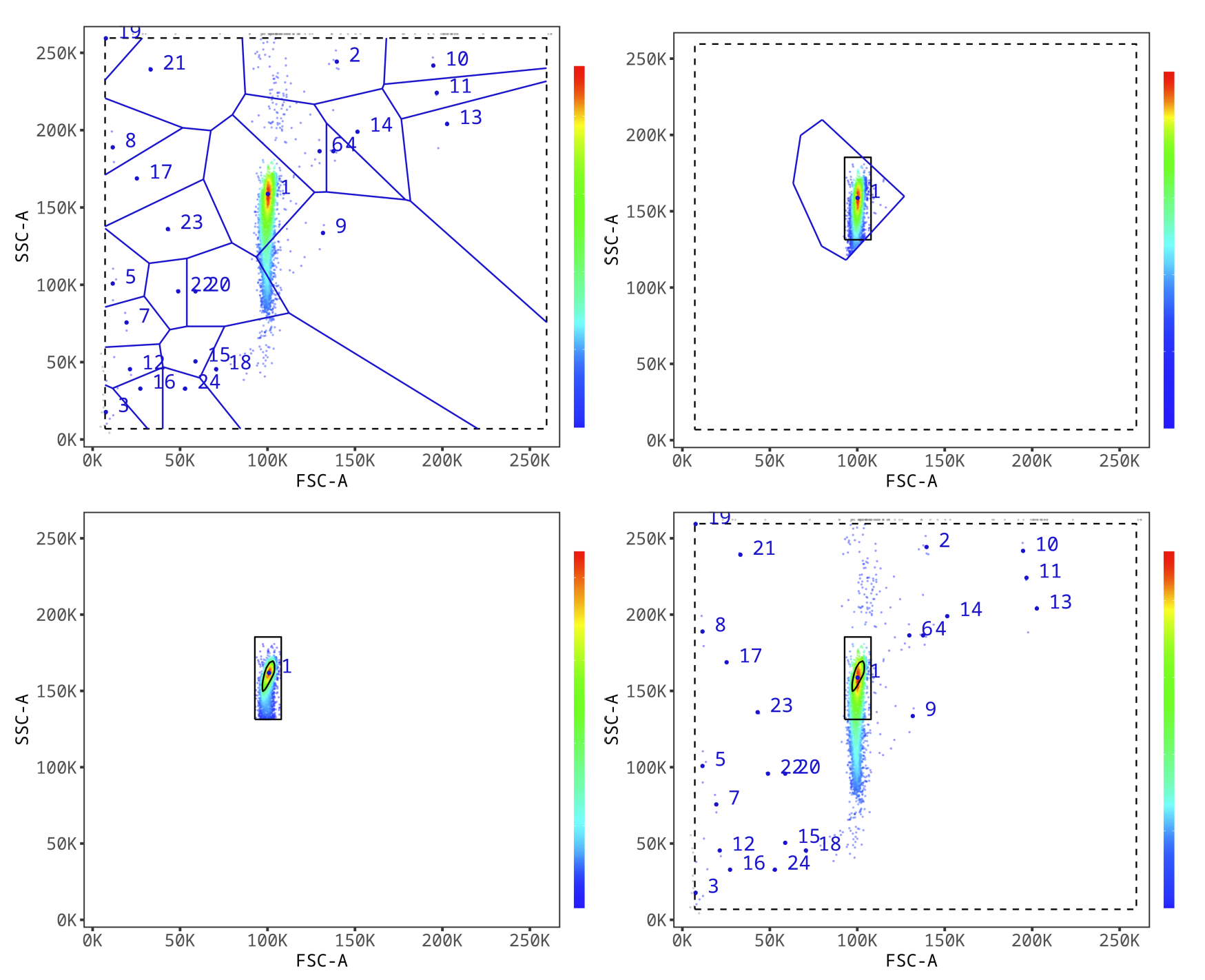 Autogating process. This shows the process of Voronoi tessellation based on high density regions, followed by rectangular subregion selection and the final polygonal gate determined by the convex hull of the highest density points. To avoid excessive/overwhelming output, only the final plot in the lower right will be provided in the results for each channel.

For each singly-stained control, the spillover from that dye into other channels is initially calculated as the slope of the robust linear regression of the measurements in the off-target channel versus the measurements in the dye’s target channel. The spillover coefficients on the diagonal (from the dye into its own target channel) are set to 1. This is essentially a direct extension of the approach of Bagwell and Adams, just substituting robust linear regression in place of measures of central tendency for discrete populations. This same general calculation is performed at each iteration of the optimization process. 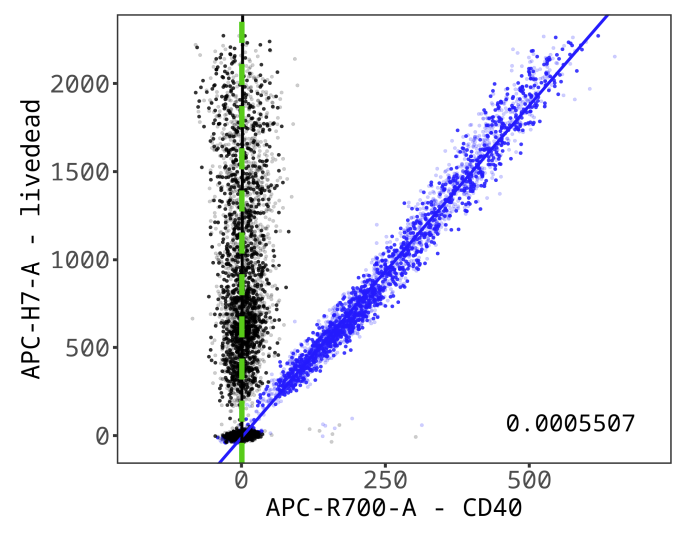 Illustration of compensation. The blue points are pre-compensation values of events from the APC-H7-A singly-stained control. It is apparent that there is significant spillover into the APC-R700-A channel. The slope of the robust linear regression of these points is used to determine the spillover coefficient or its correction during the refinement process. Black points are values after compensation using the refined spillover matrix, with the vertical dotted green line representing ideal compensation.

For each singly-stained control, summary plots will be generated summarizing the corresponding coefficients from the spillover and compensation matrices. 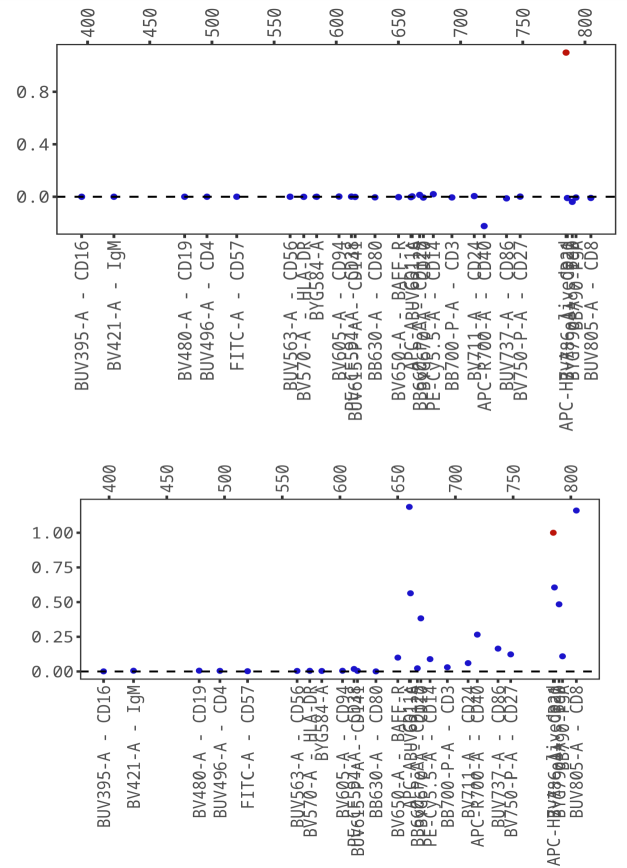 Intuitively, large spillover coefficients indicate large amounts of spectral overlap between dyes and channels. In OMIQ, similar information is presented in the heatmap of the compensation matrix within the Compensation task. For a direct measure of the quality of the compensation, AutoSpill provides density plots of the compensation errors from all pairs of channels. It also provides density plots of the skewness of the spillover values. In both cases, the density plots outlined by solid lines indicate positive errors or skewness while the dashed lines indicate negative errors or skewness. This allows for easy assessment of both the magnitude of the errors and whether they have a strong positive or negative bias. Large skewness values can be indicative of unhandled autofluorescence.

Refinement/Optimization of the Spillover Matrix

This is done very similarly to the initial calculation of the spillover coefficients, by obtaining robust linear regression models for each pair of channels. However, for off-target channels, nonzero slopes in this case represent errors in compensation that must be corrected. Theoretically, the errors in the compensated values should be equal to the negation of the product of the matrix of these errors and the true underlying spillover matrix, allowing for correction to the true spillover matrix. In practice with real data, an approximation of this true solution must be approached iteratively, which is precisely what AutoSpill does. It repeats this process of using the spillover matrix to calculate compensated values and determining the errors in the resulting compensation which allows improvement of the spillover matrix. It does this until the maximum compensation error is below a predetermined threshold. 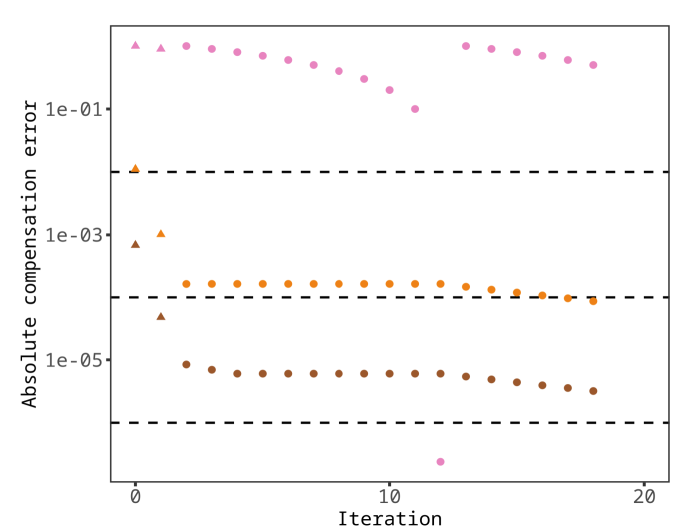 Convergence of iterative matrix refinement. This shows the progress in reduction of compensation error. The process is slightly slower than the standard AutoSpill algorithm due to the fact that the OMIQ implementation does not switch to biexponential scaling, which accelerates convergence. For each iteration, brown points are the standard deviation of errors, orange points are the maximum absolute error, and pink points are the moving average of the decrease in the standard deviation of error. The moving average is used to detect oscillations, which trigger a decrease in the step size for the iterative process to preserve stability.

The AutoSpill refinement process assumes that data will ultimately be transformed using a biexponential transformation before analysis. Because of this, during the refinement process, once the error decreases below a certain threshold, it will switch to compensating and transforming the values before determining the compensation error. Currently, the implementation of AutoSpill in OMIQ does not do this. This is primarily due to the fact that OMIQ supports other transformations and so it does not necessarily make sense to optimize values under the assumption of a particular biexponential transformation. Further, internal testing has suggested this also does not appear to make a substantial difference to the quality of the compensation result in most use cases. It is possible in the future that support will be added for other transformations and the two-stage refinement process will be supported from the OMIQ implementation.